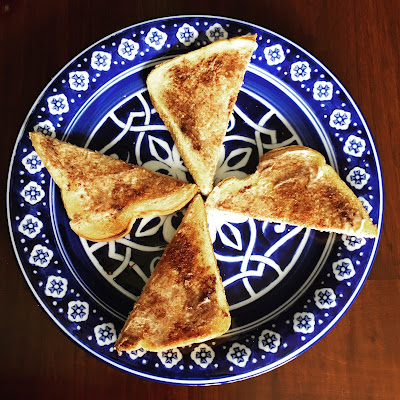 I was out of state this week and yesterday I got
home in the afternoon, played with the puppy dog,
headed down to the big city with Trishie for a lecture
by Frank Abagnale at the IMA and then we met Kate
for a very late dinner before heading home to an end of
day telephone call with Mr. Wonderful and off to bed!
This morning I woke up and let's just say, the cupboard
was bare,  nothing for breakfast...  there were a few pieces
of bread so I went old school and made cinnamon toast.

This is a favorite of mine from when I was a child but I
haven't had it in years.  It is so simple and most people
have everything they need in their kitchen.

This is something my Mum often made for me when I was
a child.  When I was old enough to make it myself I
remember we had a spice jar with the sugar and cinnamon
already mixed together ~ I don't remember if this was a
commercial product or just something my Mum mixed up
herself to make it easier for me.

It was still delicious!

Posted by American Homestead at 11:08 AM